A Perfect End to a Perfect Record 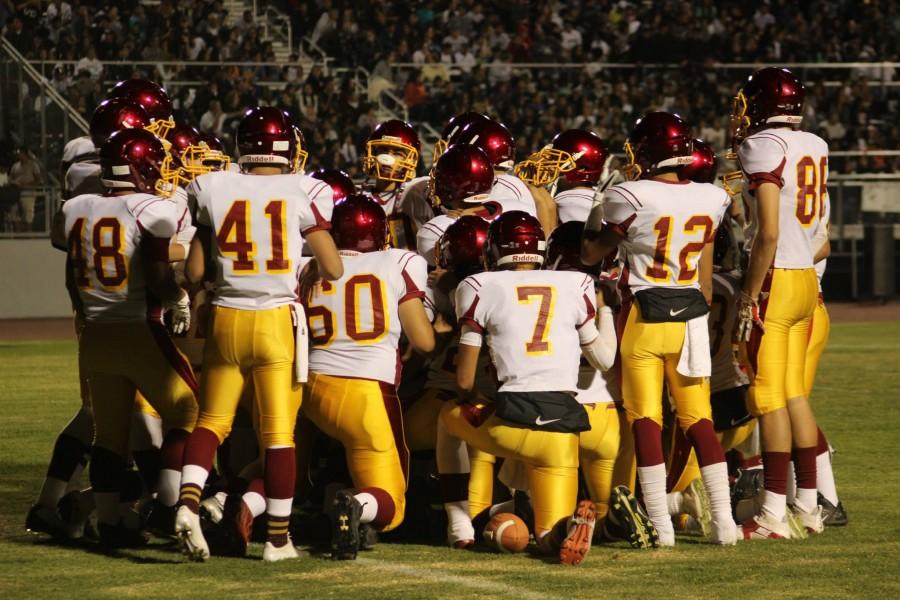 The Oxnard High School varsity football team in a group huddle prior to their game against the Pacifica High School Tritons.

“Before the game, it was full of energy, you could feel the intensity, even from the other audience. You could hear the chants beginning even before the ball was even on the field,” said Oxnard High School senior Benedicto Rosario.

On November 7, 2014, as the last game of the regular season, Oxnard High School’s varsity football team went against the undefeated Pacifica High School Tritons in a game that would decide the Pacific View League (PVL) Champions. The Tritons had an unbeaten record of nine wins and zero losses, while the Yellowjackets had the record of seven wins and two losses.

Pacifica High School senior Jordy Pineda said, “[prior to the game] at school, [the school spirit] was great — we had a rally, we were pumped up, everyone was ready for the game.”

Going into the game, OHS varsity football player and junior linebacker (#44), Max Vasquez felt confident about winning the rivaled game, despite Pacifica’s unbeaten record. “Well of course I thought we were going to win. I felt like we were determined enough and hyped enough to win,” he said.

Junior defensive back (#38), Jacob Garcia said, ”We didn’t pay attention to their record we just practiced hard and made no mistakes.”

By bleaching their hair blonde, the Oxnard High School varsity football team expressed their unity and preparation for the PVL title, as well as bragging rights for ownership of Gonzales Road.

During first quarter, the Yellowjackets opened the game with a 29-yard run by OHS linebacker (#36) Raymond Caldera. Soon after, it was OHS taking the lead with an impressive drive that took more than eight minutes. Caldera capped the drive for a 4-yard touchdown run that would put OHS ahead of Pacifica. However, the Yellow jacket’s lead didn’t last long. The Tritons responded with a 9-yard touchdown run to tie the game at 7-7.

Before halftime, the Yellowjackets put together a drive that OHS varsity quarterback and junior (#7) Dalton Pagano led for a 40-yard touchdown run. Despite OHS regaining the lead, the Tritons once again tied the game with a touchdown, which prompted the score read 14-14 at halftime.

At the start of the second half, the Yellowjackets scored another touchdown making the score 21-14, but the Tritons re-established a tie game with a 63 yard touchdown. The Yellowjackets were able to make an interception to get the ball back in a play that would give them the lead of 28-21 in the third quarter.

With a final score of 41-21, Oxnard High School claimed the Pacific View League title and ended Pacifica’s perfect record. OHS senior running back (#27) Raudel Flores said, “[the games atmosphere] was really shocking. I never felt that much electricity in the crowd and on the field. It was intense.”

In the end, it was OHS that came out victorious. Pacifica High School sophomore Matthew Martinez said, “Oxnard was going to win honestly like I’m from Pacifica, but I didn’t have that much confidence in our team.”

The school spirit from OHS “ was honestly really great. I got to tip my hat off to those guys over there–Oxnard had it tonight,” said Jose Cruz, a sophomore at PHS.

According to Oxnard resident Derek Standefer, the Yellowjackets had the victory from the start. “Pacifica’s schedule was a lot less challenging than Oxnard’s this year. Just because they went 9-0 doesn’t mean anything. Oxnard was the first real team they met,” he said.

Vasquez mentioned how he felt making it into California Interscholastic Federation (CIF) Championships, ”Our thoughts are to play like we’ve been playing and going in determined.” Garcia added, “We’re excited, but we have a lot of work.”

The Yellowjackets will have their first round of the CIF championship against the Torrance High School Tartars at home on November 14, 2014.

Visit OHS The Buzz on Facebook to view the other 1,000+ photos in our photo albums further covering this game.