Sophomore Brogan Gallagher talks about her experience in theater 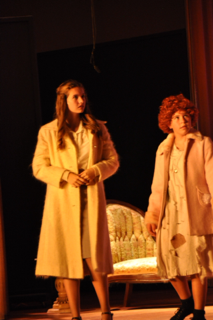 Gallagher as Grace in Annie.

For most people, the thought of performing on a stage in front of a large crowd, would be nerve-racking, but for Oxnard High School sophomore Brogan Gallagher, the stage is practically her second home.

Gallagher has been doing theater at the Performance Theater for Young Artists (PTYA) in Ventura for two and a half years. “I started doing [theater] because a friend of mine introduced me to it, and I wanted to try something new,” said Gallagher.

“When I first started there, I was super nervous. I was super shy, and I didn’t talk to anyone, but the more I did it, the more confident I became in myself and the more I started to like it,” said Gallagher. Since starting her career in theater, Gallagher has participated in multiple shows such as, Thoroughly Modern Millie, Les Misèrables, Beauty and the Beast, Annie, Our Town, and The Little Mermaid.

“PTYA prepares for their shows with approximately three months of rehearsal 2-3 times a week. We all work together to learn the lines, songs, and choreography,” said Gallagher, explaining the work that goes into each show.

“Before I go on stage, I have a lot of pre-show rituals I need to do because of my superstitious mindset. They include little things like singing my favorite song, reading inspirational quotes, tongue twister vocal warm-ups, and putting a flower in my shoes.”

“Theater has definitely changed my life for the better,” said Gallagher, “ I’ve grown so much more confident in myself, both with just who I am and being in front of people.”

“I definitely hope to pursue a career involving theater or performing in any way possible,” Gallagher said. “Of course, I have a backup plan, but the way I see it, is that if I don’t try and at least give my dreams a shot, then I’m gonna regret it, so I’m going to try my best.”

“To anyone interested in trying theater, I say go for it. You never know you’re going to like something until you try it and see for yourself, ”she said, “Step outside your comfort zone and step onto the stage…”